An in-depth study of the real X-Files that features chapters on official government records on Sea-Serpents and the Loch Ness Monster; Crop Circles; UFOs; Men in Black; Spontaneous Human Combustion; Cattle Mutilations; ESP; and much more!

Here at "The Strangest Secrets" you'll find all the latest news, reviews and information on "Strange Secrets: Real Government Files on the Unknown" (Nick Redfern with Andy Roberts, Paraview-Pocket Books, a division of Simon & Schuster, 2004).
You will also find all the latest information on newly-surfacing official military, government and intelligence files on weird phenomena.
Publishers Weekly says about "Strange Secrets": "This is a trove of entertaining stories for X-files fans."

Nick Redfern
I am the author of many books, including "A Covert Agenda;" "The FBI Files;" "Cosmic Crashes;" "Strange Secrets (with Andy Roberts);" "Three Men Seeking Monsters;" "Body Snatchers in the Desert;" "On the Trail of the Saucer Spies;" "Celebrity Secrets;" "Man-Monkey;" "Memoirs of a Monster Hunter;" "There's Something in the Woods;" "Science Fiction Secrets;" "Contactees;" "Monsters of Texas" (with Ken Gerhard); "Final Events;" "The NASA Conspiracies;" "Space Girl Dead on Spaghetti Junction;" "The Real Men in Black" and "Keep Out!" Proudest achievement: knowing all the lyrics to every one of the songs recorded by The Macc Lads. Contact me at Facebook: http://www.facebook.com/#!/profile.php?id=553360287

Majic Eyes Only and the Alien Virus 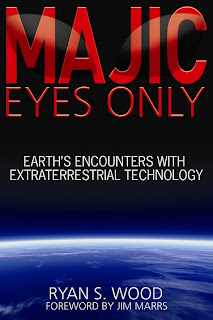 When it comes to accounts of crashed UFOs, there is one area of the subject that is seldom discussed - namely that relative to so-called alien viruses.

There is, perhaps, a tendency for us to assume that if an attack on the Earth by hostile extraterrestrials ever takes place, it will likely involve E.T. wiping us out via the awesome power of futuristic, planet-pummeling weaponry and technology.

But there's another possibility, and it's a highly disturbing one, too. Perhaps the end might be on top of us before we even realize it. And, maybe, the first indication will be when people start dropping like flies. That's right: extermination may very well be provoked by the spreading - deliberate or otherwise - of a lethal alien virus, against which the Human Race may not have any form of defense.

If you think such a scenario is way off target, or could never, ever come to pass, you might be wise to err on the side of caution.

A very good source for such alien virus-themed data as it relates to alien life and UFOs is Ryan Wood's book, MAJIC EYES ONLY: Earth's Encounters With Extraterrestrial Technology.

Not only that, Wood also cites the text of official, previously-secret files reflecting the distinct possibility of severe illness provoked by alien infection.

In the pages of MAJIC EYES ONLY, Wood highlights a number of significant and relevant cases, including: (A) the reported crash of a UFO in North Wales, United Kingdom in 1974, along with the transfer of alien bodies from the crash-site to an ultra-secret installation in the south of England called Porton Down - well-known for its official research into biological warfare and exotic viruses; (B) a second event from 1974 - in Chihuahua, Mexico - involving the apparent mysterious and sudden deaths of Mexican military personnel engaged in recovering the remains of a saucer-shaped vehicle, and who were exposed to a lethal virus of E.T. origins; and (C) an event that occurred in Somaliland in 1996, in which the crash of an object of unknown origins led to widespread and severe illness in the local human and animal population.

As Ryan Wood's MAJIC EYES ONLY clearly demonstrates, the UFO issue can, at times, truly be considered a deadly one...

Check out Ryan Wood's book, MAJIC EYES ONLY: Earth's Encounters with Extraterrestrial Technology, which is the definitive guide to UFO events of the crashed kind.

And here's the publisher's information on Ryan Wood's book, which, for crashed UFOs devotees, makes for essential reading:

MAJIC EYES ONLY is the most authoritative and comprehensive chronicle ever published on the subject of worldwide UFO crashes and subsequent military retrievals from 1897 to the present. The author guides the reader through 74 UFO crash incidents supported by compelling evidence in the form of official documents, eyewitnesses and in some cases physical evidence.

Since 1984, multiple sources have leaked, revealed or discovered some 3,500 pages of UFO documents, hundreds classified Top Secret and linked to Majestic-12. These MJ-12 documents, coupled with the Leonard Stringfield data and strong investigations by other case experts, provide a powerful core of UFO crash incidents.

The idea that major governments have covered up the true nature of the UFO phenomenon for more than half a century through unprecedented secrecy, deception and intimidation strikes many reasonable citizens as preposterous. Yet, this book provides a wealth of evidence, including declassified and leaked government documents and credible eyewitness testimony, that supports the uncomfortable truth of this "preposterous" notion.

Majic Eyes Only is the Top Secret security classification for overwhelming proof of the most deeply held secret on the planet: we are not alone in the universe. Furthermore, several major governments have captured and exploited both extraterrestrial spacecraft and living aliens, for purposes that may sometimes defy understanding but which undoubtedly include the relentless quest for military supremacy and the preservation of society's established power structures.

On March 5, 1942 Chief of Staff General George C. Marshall created an inflection point in history by issuing a Top Secret memorandum to President Roosevelt that inaugurated one of the most secret enterprises the world has ever seen: the Interplanetary Phenomenon Unit (IPU). The existence of the IPU is not speculation; it has been acknowledged in several Freedom of Information Act requests. It was within the IPU that re-investigation of the 1897 Aurora, Texas UFO crash retrieval began, along with investigation of two UFO crashes that occurred in February 1942, one in the mountains of San Bernardino, California, and the other just off the Southern California coast - all of this years before Roswell.

MAJIC EYES ONLY is a landmark synthesis and review of every credible UFO crash retrieval event uncovered worldwide to date. Assembling data from his own research and numerous other investigators, including crash retrieval pioneer Leonard Stringfield, the author presents 74 UFO crashes from 1897 to the present, supported by compelling evidence in the form of official documents, eyewitnesses and in some cases physical evidence. Incidents do vary in quality, evidence, and therefore authenticity. However, any reader who starts from a neutral position will find, by the end of this book, that there is sufficient evidence to conclude that: 1) UFOs have crashed on earth, 2) governments have recovered and exploited these alien technology gifts and 3) most disturbing to a democratic free society, the "alien secret" is more important than constitutional or individual rights.